So where do YOU sleep at night?

As last week's name game was so much fun & we got to learn more about our DWB buddies, I figured I throw out a new question of the week!

When Sherman first came to live with us, Scott & I actually encouraged him to sleep in our bed. He wanted to sleep on the floor but we made a big deal about getting him to jump in bed with us & snuggle at night. He realized how much more comfy the bed was than the floor and decided that was a fine place to sleep. And that's how it was for 4 years.

Once Penny was out of her crate at night, she also started sleeping with us. It was often very uncomfortable for the humans but we made accommodations for the the two of them b/c we were STUPID!

When we decided to add Lola to the pack, we realized that 3 dogs in the bed was just unacceptable. And we finally came to our senses and determined that no dogs in the bed at night was preferable. Getting 2 dogs that were used to sleeping in the big bed to sleep on the floor in their beds was not going to be an easy task. So, Scott put eye hooks into the baseboards and we stared tethering them to their beds at night. You can imagine how well that was received the first few nights! Penny kept trying to jump on the bed and was immediately flung onto the floor (fortunately she's the smart one and after a 1/2 dozen tries, she gave up & slept in her bed). Sherman, being the gigantic baby that he is, whined & cried off & on for at least a week.

We've finally settled into a nice routine where they all snuggle in bed with me until Scott goes to sleep and then everyone gets in their respective dog beds without fuss. Lola still sleeps in her crate b/c she loves it. Sherman & Penny are no longer tethered and Penny will sometimes sneak into our bed in the middle of the night. She's amazingly cat-like and I never feel her come up nor do I notice her in the bed till morning. Mr. "Bull in a China Shop" is not so graceful and it feels like someone dropped a ton of bricks on the bed if he decides to come up. But he gets back in bed when I tell him.

"I sleep in my big bolster bed with my blankie". 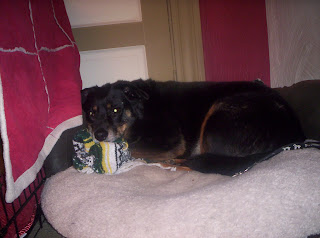 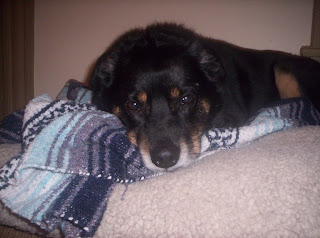 "I either sleep in my bed on in the pile of clothes Dad leaves on the floor next to his side of the bed." 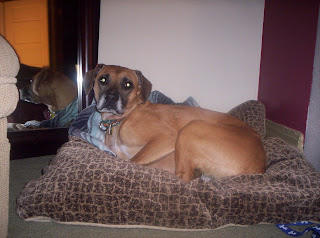 "But I would prefer to sleep with my best friend Penny!" 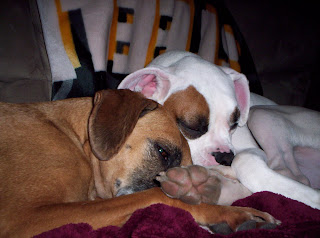 I have to admit, Ruby is in bed with me. Started the week she came home and I wouldn't want it any other way. Yes she hogs the bed, yes she steals the covers and the pillows and yes she snores...but I can't imagine not snuggling with her.

Sometimes she wants to be by herself and sleeps on the chair at the side of the bed...believe it or not I actually go get her! I know crazy!

I sleep downstairs in the living room. I'm supposed to sleep on my bed, but in truth I usually sneak onto the sofa once I'm left alone then jump off in the morning, hehehe!

I sleep in the guest bedroom. I love having human guests to stay over because they get to share the bed with me! Not sure they enjoy it quite as much! J x

I hit enter before I finished typing.....

Maybe mommy and daddy should get a bigger bed so you can all sleep together or buy a bed just for doggies. Nobody likes sleeping alone.

Sophie never slept on the bed, and never wanted to, until she tore her cruciate ligament. I started lifting her on to the bed thinking it would be more comfy for her. I think she still prefers her own bed, but usually starts out in the big bed and then moves down at about 5 am. It seems to work out well for everyone.

I sleep downstairs in my crate, which I really love - I get to snore all I want and I fluff up all my blankets and burrow like a little gopher! On the weekends, my Mom comes down and gets me early in the morning and I sleep at the foot of her bed. That's nice, too.

Hey Sleepy Guy and Girls,
At night, I sleep in one of two places. Either in my bed or, if I am especially sneaky, clean or persuasive, I can creep up onto the hooman bed and sleep between them. If I can't get between then I will settle for next to Dad somewhere. In the day time I sleep ANYWHERE (but mainly on my couch or bed).

Love and Licks,
Texas (and his humans).

We sleep on the big comfy bed. And sometimes, if our Mom & Dad have been good, we let them sleep up there with us too!

I sleep in the moms' bed, but Dakota sleeps downstairs because they don't love her as much (they say it's because she has a bad back).

View my complete profile
We have a new email addy: ferndoggleblog@yahoo.com. Drop us a line & say HI!