It's a beautiful Indian Summer day here in Western PA...just got back from the park w/ S&P. They love the park...I really don't take them enough.

Penny & I had a great class this afternoon. She really has come a long way. We got to class late & jumped right into a heeling pattern. Penny went with the flow w/o a hitch. There was a choc. Lab next to us that looked so much like our former neighborhood bud, Sammy...Penny wanted SO much to play. But he was working & that was a good distraction for her.

She really impressed me when we did Sit & Down stays w/other dogs Heeling around us. Penny can get so distracted from another dog(s) Esp. when they stop & Sit right beside her. A quick glance & eyes back on me. She did so well. I think my giant grin may have been the only praise she needed. But the JACKPOT of liver she got after Staying next to a dog she really doesn't like, helped a lot!!!
Posted by Ferndoggle at 11/12/2005 12:56:00 PM No comments:

Oooohhh. My first post. I don't know if this is the customary thing to do b/c this is my first blog. But I'd like to introduce myself, my best friend and my dogs.

Me: Jen, 32 yo, Aries. I live on Jackman Avenue in a suburb of Pittsburgh PA (USA) called Avalon. I share my life with Scotty, Sherman, Penny & (soon to be) Lola. We have a big, old 100+ yo house which we're in the process of renovating. I am an Executive Assistant and have worked for the same company for 8 years. We just recently moved our offices less than 10 minutes from my house. I may die at that company...for convenience sake alone. I have a younger brother (Kevin) and two loving parents. For the most part I'm pretty boring. I watch a lot of stupid TV and spend lots of time w/ my dogs. 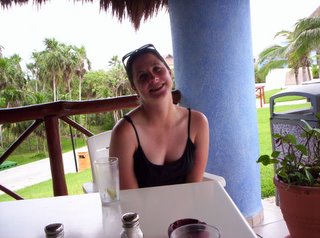 Scotty: No...we're not getting married anytime soon. And no...we do not want kids. Scott & I met at work, fell in love & moved in together after 6 months of dating. He puts up w/ a lot from me. I'm big on Talking, Planning, more Talking, making plans & lots more talking. OK...there's more to the relationship than that, but after 5+ years, we still laugh everyday & although I'm a giant PITA...he somehow finds that charming. 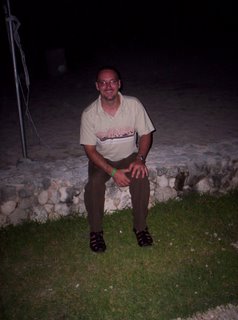 Sherman: Our first dog. A Rotti/Aussi/Terrier/Basset Hound/Shepherd/husky mix, he burst into our lives in August 2001. We went to the BCHS looking for a Rotti & came home w/ Sherman. He was caged w/ another dog, much larger than him but he kept pushing his way towards the front to be seen. I wanted to look at his kennel mate (a beautiful yellow LabX) but Scott insisted on the little guy up front. Sherman walked right into the "Meet & Greet" room, fell to the floor & demanded belly rubs. Scott was smitten & so was I. He quickly became a Momma's Boy and was the perfect choice for two clueless kids wanting a dog. I love this dog w/ everything I have and he really changed my life forever. He's far from perfect, but he was a great starter dog...housetrained, OK to leave alone for 8 hours a day, good w/ people. Shermie has his quirks...he doesn't like most other male dogs, he's bossy, demanding & stubborn, he's food obsessed & he's a bed hog. But for all his faults, he's taught me so much & he'll always be my perfect little boy. 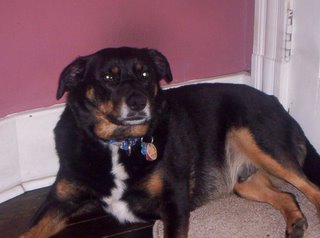 Penny: Sweet Penny w/ the floppy ears and stubby legs. A friend sent me pictures of Penny b/c she knew we wanted a companion for Sherman. I sent them to Scott & it was all over. Scott didn't want another dog, but was very taken by this skinny, doe-eyed little girl. Penny was at an Animal Control facility and I didn't even get to meet her before I signed the adoption forms. But when I picked her up...she was all I'd envisioned & more. Her world revolves around Scotty and she loves to wake him every day w/ 100 kisses. She's the biggest flirt ever & loves to strut her stuff for the men in her neighborhood. Penny had a very serious leash aggression problem that we've overcome from private lessons & LOTS of group obedience classes. Penny has earned her CGC & will someday be a great therapy dog (we just need to get through the Supervised Separation). She LOVES to learn & really makes me look good in class. She's so very smart & motivated & has taught me SO very much. 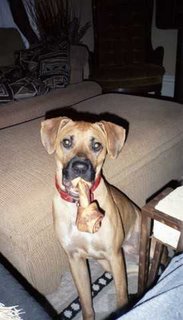