We had a little summertime celebration at Debby's in honor of her b-day. We did this a couple years ago & it was a lot of fun (although the attendees have greatly changed). Penny & Lola came with me as they have been around Debby's dogs a lot & love to be fawned over by absolutely everyone.

Penny started out the morning in a mood...it wasn't bad, just very clingy & needy. She was very anxious and whiny. Scott warned me that I should just leave her at home...but what does he know???

Apparently a lot b/c she was pretty snarky w/ the other dogs. She put up w/ Trent following her around and licking her...she never has a problem with this. And as soon as Lola arrived, he turned his attention to her...alternating mouth licking and guarding everything from ice cubes to potato chips to balls from her. Something didn't sit right with Penny & as soon as the first guest arrived, & she flew off the handle at Trent. The spat was quickly diffused but Penny was still stressed & Trent continued to snark at Lola, pinning her under a chair & giving her a nice big scratch on her face. I decided if I was going to have any fun, it would be in my best interest to take the girls home...which is what I did.

In hindsight, I think Penny is feeling the need to defend Lola. She's had two squabbles w/ Debby's dogs, one w/ Kera & now this one w/ Trent. Both occured in Lola's presence and while I don't recall Kera challenging Lola, she very well could have growled at her and Penny could have taken that as a threat. Same goes w/ Trent. There have never been any incidents (that I know of) w/ Penny & any of Debby's dogs when Lola is not around. They generally get along great.

The rest of the day was a lot of fun and I actually got in the pool this year! It was, after all, 95 in the shade!

The girls were back to their old relaxed selves once we got home. 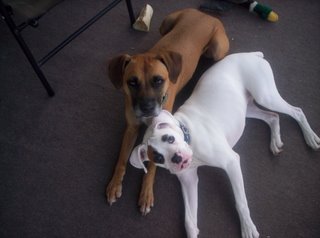