Well, I officially have the laziest dog on the planet. Sherman has taken to eating his breakfast & dinner laying down. 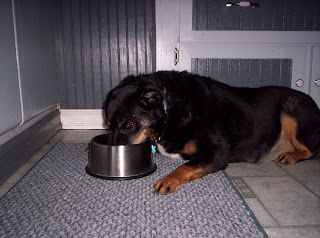 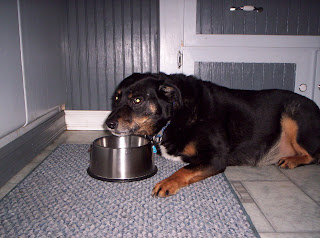 Now, he's no spring chicken...but this is pathetic!

Interestingly enough, he has decided that late night & early morning should be his play time. Hey, he's had plenty of rest all day (and overnight)! I'm usually staring at the backs of my eyelids by 10/10:30 and around 11, he'll start. Squeek, squeek, SQUEEEEEK! (jump up on the bed) Squeek, SQUEEEEK! And he'll repeat this process around 5:00 am. As no one actually gets up to play with him, it's usually short lived...Thank DoG! 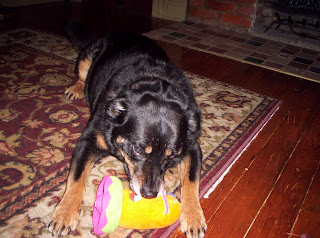 It's still cold here, but all the new smells of Spring are everywhere & Sherman & Penny are driving me crazy. They are dogs, they like to sniff stuff...that's part of the fun for them on the walk so I generally indulge them. I do have a seven second sniff rule for Sherman b/c he will stop & sniff every single blade of grass he comes across. Penny isn't usually bad about this but tonight she was particularly annoying.

Lola is doing better and although we did have 2 mini bark breakdowns, they are becoming easier to diffuse. She's no longer barking at other dogs barking that she can't see and is becoming much more relaxed in our neighborhood.

I had a guy pull his truck over and ask me about her.

Would it have been worth my time to try & explain to this guy in the middle of the street why I am not "mating" my dog? Somehow, I doubt it.