If ever there was a girl for Sherman, it would have to be Dot from the Brat Pack. I watched a video of her playing with her Mom & sister Sam and felt like I was watching a spotted version of my bestest boy. She growls when she plays, she dances around the room with her toy, she snarks at her sister when she gets too close, she's "big boned". They are a match made in heaven.

She's pretty darn cute too! She smiles like Shermie. 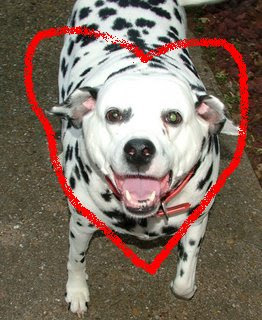 On the home front, Lola was again, wonderful in class. She played with a Rotti puppy before going inside and was completely appropriate with him. But then she got all snarky with a very friendly pitbull during class. I can't figure this little girl out. She has improved on some things since last week...her Recalls were better, Stays were much improved, Heeling was good. She doesn't yet have a clear understanding of Heel as a position so we need to work on that and she has a new habit of coming around to sit in Front at the Halts. The highlight of the evening was the Figure 8s. We used people and dogs as posts and her heeling was really great, especially on the outside. I didn't have to ask her to hurry, nor did I have to ask her to slow down on the inside. And when it was our turn to be a post, she gave me stellar attention. During the happy Pitbull's turn, he left position at the Halt and came over to say hello to Lola. She flicked her eyes at him and then right back to staring at me...without me even asking!! No Leave It, no Lola!, no Ready?, no nothing! All on her own. That was huge and she got a giant YES!, lots of rubs and about 20 bites of chicken.

And one final note...our hearts go out to the victims and families of the VA Tech shooting. There are no words to express the sorrow felt around this country today.