I finally put my dehydrator to work this past weekend. I got all of the supplies ready. Non-stick spray, garlic powder & papertowels (to dry the meatables before going on the grates). 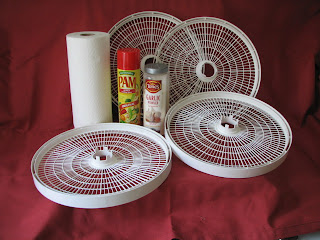 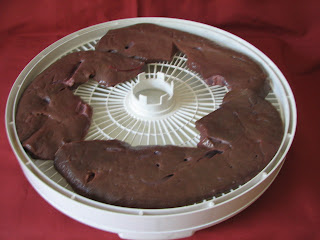 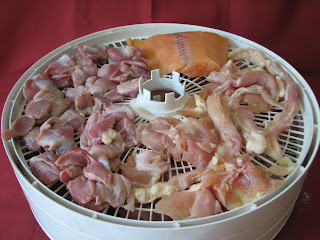 The smell wasn't too bad while it was cooking. I let the machine work for 12 hours and ended up with a bunch of shrivelled up meat. 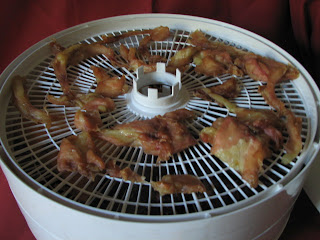 My mistake was putting it in the fridge in zip-close bags. It got really sticky & hard to work with.

So then next day I spread it out on papertowels and let it air dry for another 8 hours. 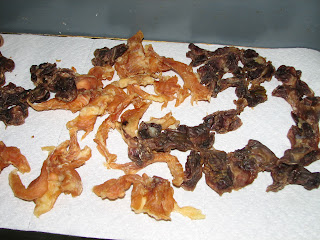 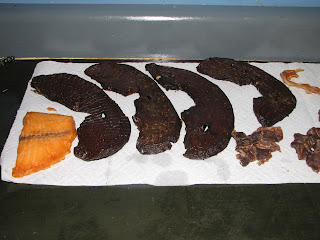 It still was really sticky and hard to work with. I pitched the Salmon because while it was dry on the outside, it was moist and flaky when I went to cut it. I should've eaten it.

We don't care! Give us those dried up Meatables!!!! 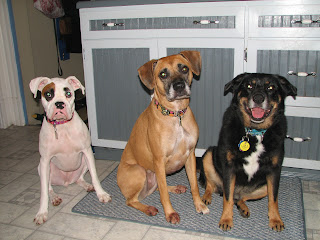 Really, the Dogs loved all of the meat. Even picky Penny. So at least I have goodies for them for a while.

The conclusion...next time, I will let the meat dry longer (probably 18 hours). And I will let it air dry before putting it in the fridge.

I didn't think it smelled too bad while it was cooking...but the lingering effects (BAD) are still in my kitchen 4 days later. I will also put the machine outside next time.

I'm going to try & dry stuff for ME next...apples, bananas, apricots, tomatoes, etc and see how they turn out. I kind of prefer my old method of making dried treats for the Dogs (email me if you'd like the details). The smell isn't as bad & it only takes about an hour & a half.

It was worth a shot!