Wednesday, I came down w/ a wicked case of food poisoning. I haven't been that sick in my life. Penny & I missed meeting up w/ Annette to practice for the demo next weekend & Lola missed Shelley's class on Thursday.

Saturday morning Lola started throwing up. She threw up all of her breakfast and I didn't give her much else during the day to help rest her belly. Sunday she again threw up all of her breakfast and I started to think it was the new food I had started a week or so ago. So I boiled some chicken & rice and gave her a small amount. She managed to keep that down but early Monday morning she vomited a lot of liquid and also a large hunk of something. It was about 2-3 inches long & the shape of a hotdog. I put it in a baggie & called the vet.

Turns out it was a HAIRBALL!! Composed of short & long black hairs. Apparently I need to do a better job of cleaning! Lola is a garbage raider but usually just makes a big mess. I really think that she got into the garbage after I brushed Sherman (and disposed of clumps & clumps of hair). So, Dr. Nagle sent us home w/ the instructions to give small bland meals for the next few days.

Lola had graduation from Maribeth's class tonight and performed Roll Over like a pro. OK...I did have to lure her the first couple of times, but then she just started volunteering it. And kept on, & kept on, & kept on...just rolling her self around on the floor. It was very cute!

Scott & I broke out the baby pool today to see if the dogs would enjoy lounging. It's been almost 90 the past 2 two days. I figured that Lola would like it b/c she loves water. She follows me around when I water the plants and drinks from the hose.

Scotty coaxed them in... 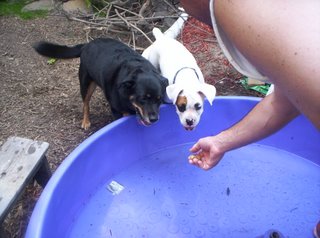 Lola just wanted to drink from the spout... 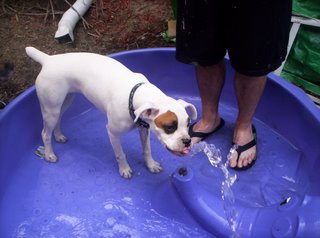 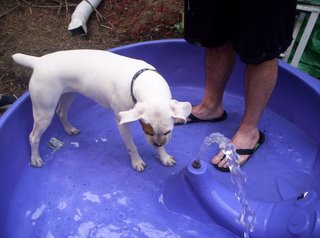 Sherman loves to lay in puddles so I thought maybe he'd lay down & cool off. Not a chance. 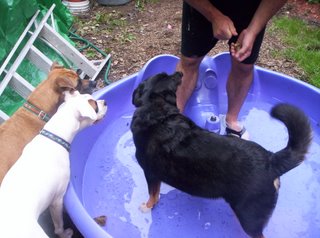 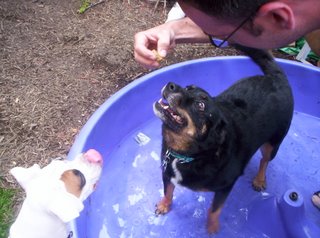 She IS a Boxer! Lola went to CBW today & I caught some great pics of her playing! 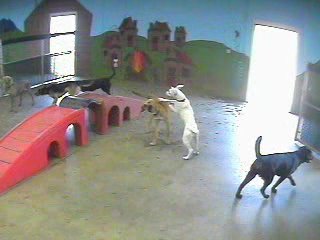 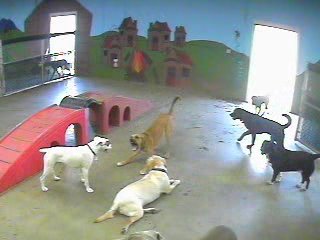 That's her in the upper left corner Boxing w/ another Boxer! 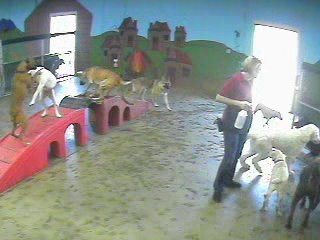 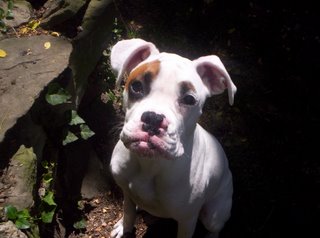 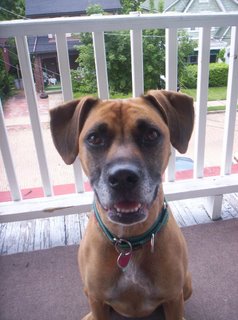 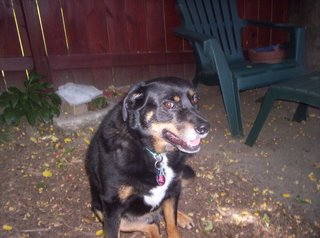 Lola & I started Shelley's class tonight. Apparently we worked way to much to BANG! b/c she spent 1/2 of the class flinging herself on her side when I ignored her. I stopped c/t unless I cued it. It is very cute though. We got a chance to review a lot of things she already knows...sit, stand, target, attention, not jumping & mauling Rita & Shelley. It is very nice being in that class b/c they both know what to do when she does jump...they ignore her until she sits & then c/t. By the end of class, she was sitting politely for petting when they approached.

We then went over to my friend Tara's house to drop off our veggies (Tara & I split a summer share at http://www.kretschmannfarm.com). Lola had a ball running around in the grass and rolling all around. Poor thing doesn't get a chance to play in real grass much. Next time I go to the park, I'm gonna take my long line & let her go nuts in the field. Anyway, she snuck out of the yard in the one little teeny spot that's not fenced (they're building a wall) and ran up on the hill. I called her to me & she took the chance to blow me off. After about 20 seconds of running like a maniac, she took a flying leap off the retaining wall & crashed head first into the ground. She was very shaken & I really thought she broke her neck (literally). Tara's husband then said "Jen, her leg" and I was sure when I looked it would be broken in 10 places. She was holding it up and not putting any pressure on it. It wasn't broken that I could tell, but she had bitten her tongue and it was bleeding. We got her some water & by the time she was done taking a giant drink, she was walking on it. Damn dog nearly gave me a flippin' heart attack!!! By the time we got home, she was as good as new...much to Penny's chagrin.
Posted by Ferndoggle at 6/15/2006 10:59:00 AM No comments:

Penny & I had a lovely hike at Riverview today. We took the long route & hiked for an hour & a half. I tried to get some good pics of her at Pope's Point (or Lookout...I forget what it's called), but she was hot & not cooperating. Plus there are all of those fascinating noises in the forest!! 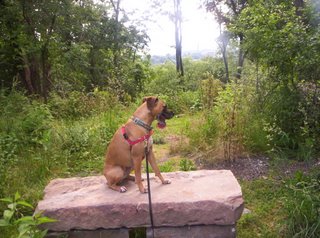 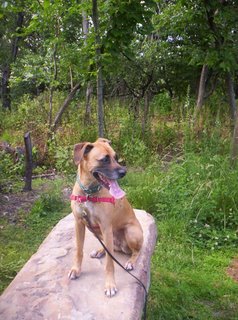 But a nice roll in the grass sure does feel good!! 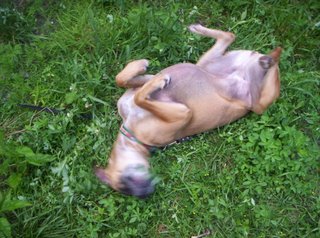 Lola has class tonight & we've been working on our trick all week...BANG! (she rolls on her side & plays dead). The past 2 weeks tricks have been a bust b/c I haven't worked on them except in one specific spot in the house. Generalizing...it's our problem. So this week, I practice in a bunch of spots and Scotty is really impressed when I show him. But will she do it in class???

Go to Mat and Kisses! have been a big failure. Lola gets so distracted by the other dogs. But not this week! While we wait for the rest of class to show up, Maribeth talks to us about various training things. I keep one eye on her & one eye on Lola. Lola is throwing herself into BANG! postition...over & over & over. And everytime I C/T (yes...lazy training. I love it!). I start ignoring Maribeth & repeating our cue over & over and she hits it every time. And then the funny thing happens. Maribeth & I are talking & Lola is hitting BANG & I'm not clicking (I didn't cue it, after all). So she starts rolling over. And fortunately I'm watching out of the corner of my eye & C/T for each time she rolls over. By the end of our talk, she's offering her Roll Over repeatedly. That's our next trick!

We spent the rest of class doing agility stuff...tunnels, place board, broad jumps. Lola really will be a natural if I can invest the time to work w/ her. She's fearless!
Posted by Ferndoggle at 6/13/2006 07:13:00 PM 1 comment:

Oh, when they're good...they're really good.

Full moon, my ass. My dogs have truly been wonderful the last few days. I still walk S&P together and we've really been working on sits at intersections. C/T for me in my consistancy...which is a big fault of mine. I'm usually...sit every 5/10/15 intersections...whatever. But in the last week or so, I've been really good about stopping each & every time & they've (well, at least Penny) become automatic. Sherman often takes a little reminder, but not much.

So, we're walking down Jackman and at the second intersection, I stop, tell them to Sit & they do w/o issue. We wait for 5 or 6 cars to go by & I'm very impressed that neither dog breaks (it's been about a minute). I release them w/ "Let's Go" and they exhuberantly cross the street. A woman on the second floor balcony of the apartment across the street (that I didn't even see) starts applauding. "It's so very nice to see well behaved dogs", she says. I smile & say "yeah, sometimes"...but I'm so proud of my pups!

Then I'm walking Lola past the Vets office & we see an elderly gentleman & his elderly dog leaving. Lola turns on "Guard Dog" and Woofs! at the nice couple. I command "Leave It!" and she does ("What a smart dog you are!!). Then I tell her to Sit & Wait...and she actually does!! Yippee! This training thing really does pay off!
Posted by Ferndoggle at 6/11/2006 07:02:00 PM No comments:

Lola graduated from Bob's class today and part of it involved a mock CGC test. I was very happy that Lola passed on all levels...well, we didn't do the stays & I could use food, but it's a good start. I need to start really working on stays w/ her...they are just so boooorrring!!

Rita was supposed to fill in for Shelley and it turned out that she had car trouble & couldn't make it. So Lola & I filled in & ran the Advanced Basic class. There were 3 dogs in there that I already knew so it was fun.

I took Sherman & Penny on a nice 45 minute walk in the neighborhood...nice as in the weather was perfect. Not nice in that we got jumped by 3 different dogs. OK...jumped makes is sound worse than it was. But 3 separate dogs were off leash & charged at us. S&P hate that & it's no wonder I have leash reactive dogs. 2 dogs backed off when they snarked at them but one took it as an invite to strike back. That was fun (not!). I have such a pet peeve for people who let their dogs loose in their yard & have no control over them. There is a reason for the leash laws!
Posted by Ferndoggle at 6/10/2006 11:19:00 AM No comments:

Lola loves to dig, Lola's not allowed to dig...the good thing about a white dog...the evidence is written all over their face.

"What? Someone was digging?" 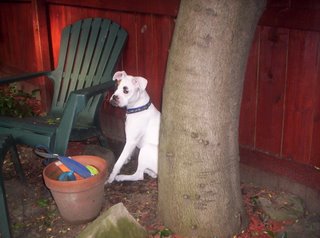 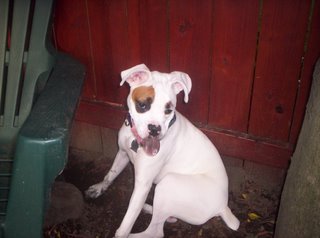 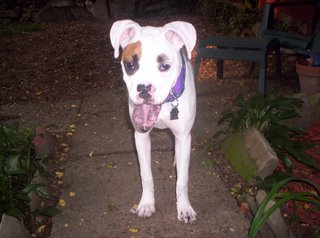 Lola & I went back to class today & it was fantastic!! I remember the day when things just clicked for Penny & I. It was if she figured out how to read my mind & everything just fell in line. That was the day I really became interested in training dogs. When your hard work starts to pay off & you and your dog become a team. It's really amazing.

Well, today was that day for Lola & I. She was really focused on learning & paying attention to what I was asking of her. We haven't done a whole lot of work on stay...nothing consistant anyway (I use Wait a whole bunch more and she's great w/ that)...but we were doing Sit Stays & you could see she was really trying to figure out what I was asking her to do. Our problem is she doesn't want to sit long. She doesn't get up, she lies down. So we'll just have to continue to work at it. 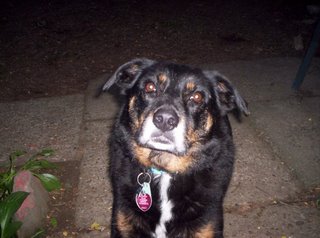 This may be my favorite picture of Sherman ever. I just love the expression on his face...he looks so sweet. Scott thinks he looks really old as the flash makes the white on his muzzle really stand out. Sherman is 9 (ish) and is showing his age. Long walks really take a lot out of him, he's often stiff & slow to get up from laying down, his hips are sensitive when I brush him.