Winter's finally here!!! I actually like the snow & as our winters seem to be getting shorter a couple of months of snowy days are OK with me. But the last few days it's been frigid! It was 8 degrees when I took Sherman out this morning. He turned himself around to go home, which never happens! 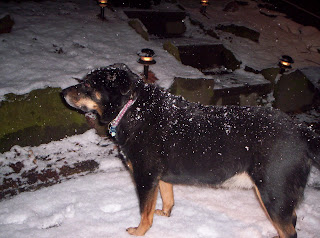 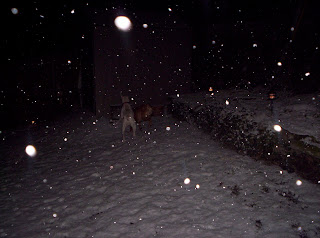 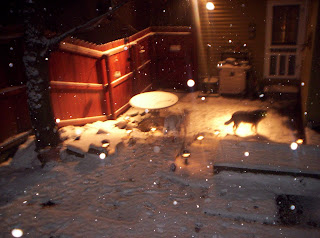 Recently Lola's been waking up @ 2:30/3 and crying & banging on her crate. Twice I've taken her out b/c I thought she might be sick. Nope...just wants to sleep in our bed. The dogs all have to sleep on the floor as 3 dogs in a Queen sized bed does not make for a good night's sleep. Sherman is tethered b/c he's Sherman & Penny usually stays put till about 4 am & then she'll sneak up & curl herself into a teeny ball. I rarely know she's even there.
Well I realized that I had taken Lola's fleece blankie out of her crate to wash & never replaced it. She has a dog bed in there but she's used to snuggling with her blankie. So I got smart & put a new one in & she's slept peacefully through the night for a week.
"I wouldn't make a fuss if you'd let me sleep with my best friend Penny. We can both fit on this bed just fine." 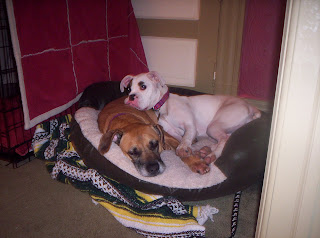 It has been entirely too cold to do anything productive on our walks. I did take Lola to Marsha's Super Puppy class and she's officially in love. His name is George and he looks kinda like this: 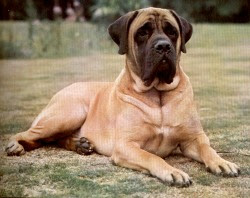 He's the size of a baby elephant and they had their first kiss on Wednesday. He was a little nervous to walk up the stairs so Lola planted a big sloppy wet one on him & encouraged him to follow her to class. She's also quite smitten with his Mom, Amy and thinks she'll make a fine Mother in Law.

Lola did really well in class. Our best in a while. Any time I wasn't paying attention to her, she'd go through her bag of tricks. Sit, Down, Bang!, Roll over, Spin, Down, Stare at Mom. It was quite cute really. She did great on all the heeling and her recall was adoreable. We did it across the whole room & she stayed in a Sit while I walked away. She did stand when I turned to face her but when I said Lola, Come!...she shot across the room to me like she was on fire. We practiced a lot of Stays with distractions (we need work in this!) and she could not resist kissing Marsha & Kelly when they came over to do the Sit for Exam. We did supervised separation for the first time and I was happy to hear that she whimpered a bit but then just hung out & waited for me. We did dog to dog introductions and she was awesome. She totally ignored the other dogs both time. She was fine meeting Marsha in the wheelchair but did not like the metal water bucket that was flung on the floor (it's LOUD!). She didn't want to investigate it at all (even with a salmon cookie placed inside) but once I turned it upside down, she ate a cookie off the top & decided it wasn't so bad. Could Lola be turning into a normal dog??? She didn't bark or flip out once...Not even coming into the building with all the other dogs leaving the previous class. She did do the little Lola Grrrrrr Rrrrrrr at George, but that's b/c she loves him & wanted to play.