We had another great class at WPHS...both for what was being taught & what we learned ourselves. Lola had a great play session & is officially out of her shell. Marsha brings her dog, Madison, to class & Maddy is really great w/ the puppies. At one point, one of the black LabX pups was getting a bit too rough w/ Lola & Maddy heard the squeals and flew across the room to correct the Lab. It was really cool to watch. While I was busy watching the other dogs play, Marsha pointed out that Lola got in the middle of two squabbling pups and diffused the situation. Good girl! I'm sorry i missed it.

We continued to review real life things...this week it was more handling, Down & cutting toenails. The toenail part took quite a bit of time as there are 12 or so pups in class and Marsha demonstrated individually how to do each puppy's nails. While she was doing that, Lola & I practiced Downs. I no longer have to lure her w/ food, but do use a hand signal in addition to the cue. She really is getting it. By the end of class, she was offering Down's more than Sit. That is saying a lot b/c Lola Sits for EVERYTHING. It's her default. That was done on purpose and I need to start reinforcing Down as much as Sit this week. 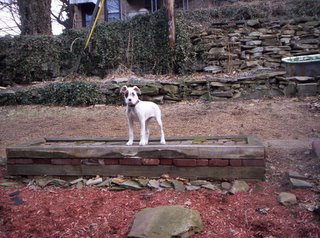 I don't know if you can tell by this picture, but Lola is all long legs & big feet right now. She has gotten so big, I can't believe it. I almost can't lift her!

When anyone asks how Sherman is dealing with our new addition , I reply..."He's waiting for her to leave". Truth is...Sherm is warming to her. It will be gradual, but eventually they'll be buds like he & Penny became. It just takes some time. This picture would not have happened a month ago. 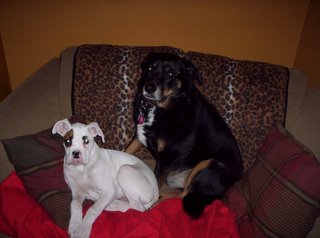