Lilian was kind enough to squeeze us into this sessions Feisty Fidos class. As I'm still concerned that Lola is indeed in a fear period, I'm keeping her walks to a minimum and doing stuff with her in the yard & house.

We haven't done much clicker stuff in a while...I have signed up for the ClickerExpo in March & thought it would be fun to see where Lola was & try to shape a behavior. We had done "go to mat" a long time ago (9 months or so) but I never really continued with it. It was the first time I'd really shaped anything from the beginning. Debby & I had just had a conversation in the last class about shaping & I told her I didn't really do it much. She seemed surprised and when I thought about it, I guess I do.

So I brought out one of Lola's old puppy blankets & laid it down about 6 feet away from me. She started offering lots of previously highly reinforced behaviors...sit, down, stare holes in my head, Bang! Roll over, down, sit & so on...I decided to help her out & threw a treat on the mat and clicked when she stepped on it. I was following Sue Ailsby's method for Level 2 and within minutes she was throwing herself on the mat over & over. I moved it to a new place...same thing. I moved it again...same thing. 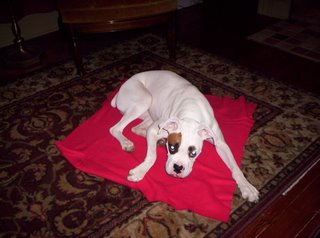