Penny & I have our first solo therapy visit on the 27th. We're going to read to kids at a local library. Our TDI coordinator suggested we work on getting our dogs to lay on a mat and practice reading to them. So Penny & I worked on getting her to lay quietly on the mat. I gave up trying to shape it & just directed her where to go. She laid right down & held her Stay. 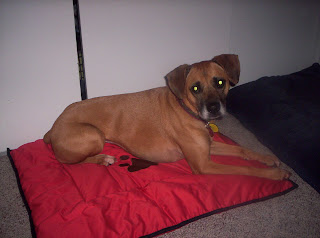 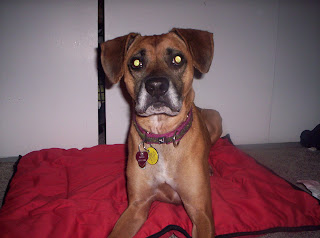 Then we worked on the reading part. I should note that Penny hates when we read, especially the newspaper or magazines. When we're reading, we can't be paying attention to her & that is just rude (according to Penny). So, she laid on the mat while I read her People magazine & gently stroked her. She liked that. We're going to practice that a couple nights a week so she can get used to it.

She can also read, all by herself. 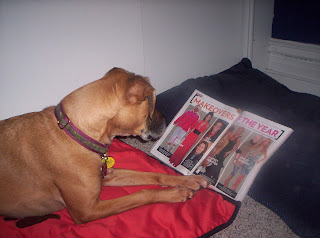 "Ashlee Simpson looks way better since she had her nose done" 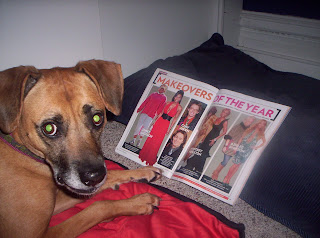 Lola - Took her to Marsha's Super Puppy class. When we got to the shelter, there were 8-10 little dogs coming out of the previous class. They were all walking through the parking lot and Lola gave a couple little growls, but stopped when I told her to leave it. We had to wait outside for them to let us in & a PWD puppy came bounding up to the door. Lola got very wiggly & I made her Sit & Wait and asked the guy if she could say hello. He said sure & they had a blast getting to know each other. Once inside, a woman we know from other classes came over to say hello with her new dog. He basically jumped Lola & started fighting with her & she fought back. We quickly broke it up & she calmed down quickly. After that she was stellar. She was a bit nervous about a 150 Mastiff b/c he was giant (and is still a puppy!) but I asked her to Leave It & she did. We did lots of Heeling, Stays, Recalls and handling. This class is basically a CGC/TDI prep class for puppies so we'll focus on several parts of the test. Marsha came over to do the exam and I had Lola sit & told her to Wait. This worked beautifully!! She didn't jump or move (but she did give Marsha a couple kisses) One of my concerns for her is she's too friendly & wants to jump on people & kiss them in the face. We had a great class & I'm very hopeful that Lola is going to be a normal dog one day. I just have to put the time in now till she matures. I went through the exact same thing with Penny & Penny is perfect (almost). We'll get there.